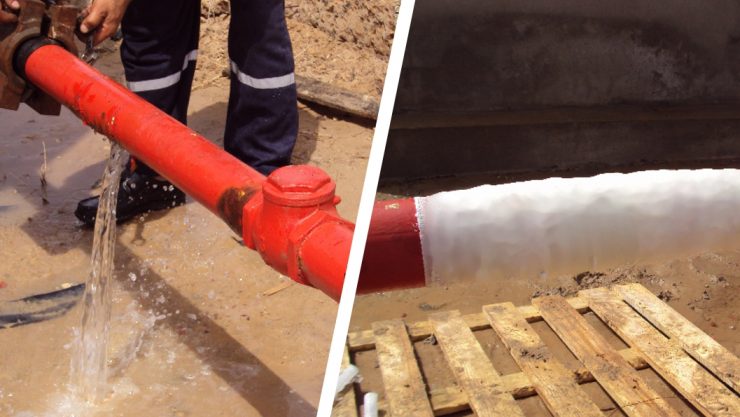 Case Study: Live Leak Repair of Above and Below Ground Water Supply Pipelines

One above-ground water pipe and one below-ground water pipe servicing a town in Libya as part of a supply network required live leak repair to seal cracks through which significant levels of water were escaping.

SylWrap Pipe Repair Contractor Case
Case with enough products to make multiple pipe repairs, which could have been used here if available rather than 2 x Universal Kits

Around 80 percent of the population of Libya live along or near the northern Mediterranean coast. With freshwater scarce, they rely on supplies being pumped via pipelines from aquifers in the south – known as the Great Man Made River of Libya.

The town of Brega in the north east is serviced by a network of 100mm steel water pipes running both above and below ground, connecting to the Great Man Made River. At least one underground leak was known about through visible signs in the earth surrounding the pipe.

Attending to the problem had never been a priority because of the complexity and cost involved in excavating the pipe, shutting down the line and then either repairing or replacing the leaking section.

The leak was not visible and so it could be ignored. This school of thought was changed when a section of above ground pipe developed a longitudinal split, through which significant amounts of water were escaping at around 5 bar pressure.

A blind eye could not be turned to such a substantial leak causing flooding to the area underneath the pipe. The importance of the line meant it could not be isolated whilst the line was fixed or replacement took place.

It was decided to use a SylWrap Universal Pipe Repair Kit to make a live leak repair. All the products contained within the Kit are WRAS approved, meaning they are safe to use with drinking water.

The tape was anchored to the side of the split and then wrapped towards and over it. Once the split had been covered, layers of Wrap & Seal were built up until no more water was detected leaking from the pipe. This indicated a successful repair.

To reinforce the line, a SylWrap HD Pipe Repair Bandage was then applied. SylWrap is a composite wrap with a water activated resin which sets rock hard in minutes. It was wrapped and smoothed across the entire repair area, creating an impact resistant protective shell around the pipe.

Completing the repair took less than 30 minutes. Having seen how quick and easy the SylWrap Universal Kit was to use, the decision was taken to proceed with the repair of the leaking underground section of water supply pipe.

A trench was dug to reach the line with enough clearance underneath so that both Wrap & Seal and SylWrap HD could be applied. The defect in this pipe was a smaller crack easily arrested using the same repair method as with the above ground pipe.

Two leaking sections of water supply pipe had now been successfully repaired without disruption to homes and businesses in Brega. More importantly, there was now an awareness of how quick and easy pipe repair can be.

Future leaks are now set to be tackled with SylWrap Pipe Repair Kits as soon as they are identified, something which can help make a huge difference in an arid country like Libya.