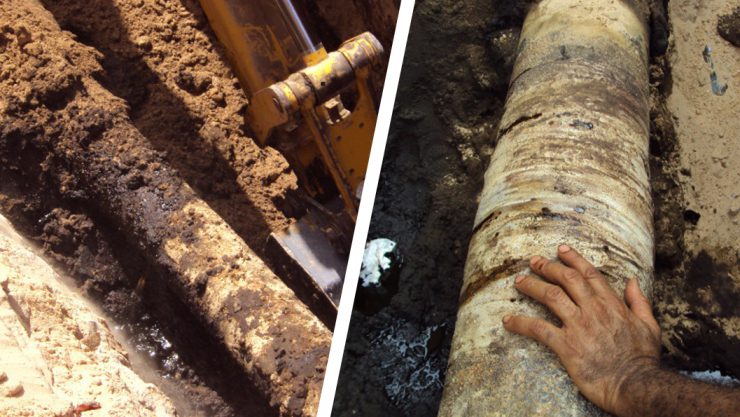 Heavy corrosion caused a small crack to appear in a 200mm fuel oil line buried underground in Libya, leaving the pipe requiring a repair that could withstand pressure up to 44 bar and temperatures up to 70°C.

The town of Brega serves as a major export hub for Libyan oil, being home to one of the five oil terminals operating in the eastern half of Libya. It is also the starting point of the 670 km Brega-Khoms Intisar gas pipeline.

Heavy corrosion had caused a small crack to appear in a 200mm fuel oil line buried underground. Once the pipe had been excavated for inspection, it became clear that it was in terrible condition, badly pitted and covered in escaped oil.

To add to the complexity of the application, the line operated under 44 bar and at temperatures of up to 70°C. Any repair had to be able to withstand these pressure and heat extremes.

Prior to the application, the pipe was cleaned as best as it could be. Oil and dirt was removed and the surface smoothed off to enable a good connection between the line and Wrap & Seal Pipe Burst Tape, which made up the first stage of the repair.

Wrap & Seal is a self-amalgamating silicone repair tape which stretches by 300 percent and fuses to form a solid rubber band over holes and cracks. Multiple tapes can be applied over each other, where they will also fuse together, building repairs with high pressure resistance.

Once several Wrap & Seals had been used and the team carrying out the repair was satisfied that the leak was suitably sealed, the repair was reinforced using SylWrap HD Pipe Repair Bandage.

SylWrap HD is a composite repair wrap with a water activated resin which sets rock hard in minutes. It provides an impact resistant protective shell to pipes and structures, increasing life span and hoop strength.

Four SylWrap HD Bandages were used to cover the repair area, reinforcing the fuel oil line before it was reburied. Each Bandage cured within 2 to 5 minutes of application.

Both Wrap & Seal and SylWrap HD have a maximum service temperature of 250°C and using multiple products created a repair capable of withstanding the pressure that the line operated under.

It took less than two hours to complete the application, notwithstanding the time to excavate and inspect the pipe. The repair was a cost-effective and less time-consuming alternative to replacing the damaged section, which could have left the line out of operation for a prolonged period.

The maintenance team who carried out the job in Brega have since gone onto use Sylmasta products to make numerous repairs to other oil lines in the region, taking advantage of the ease and convenience offer by the SylWrap range.