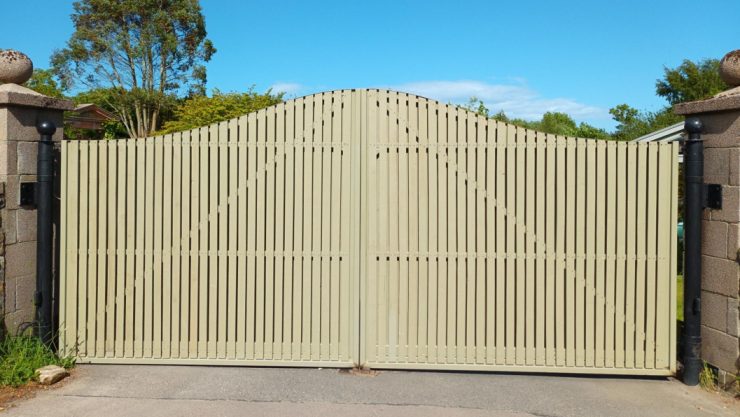 Case Study: Protection of Wooden Entrance Gates at an Estate in Scotland Against Rotting

When upgrades to an entrance gate at an estate in Scotland left an area where rainwater could pool and potentially rot wooden slats, protection was provided for the wood through a clever piece of engineering involving epoxy putty.

The estate was located in beautiful open countryside. When Storm Arwen brought wind gusts in excess of 90mph to Scotland in November 2021, the wooden gates were an easy victim to the violent weather and subsequently became damaged.

In response, the estate decided that more robust gates would need to be installed to withstand future storms. A heavy steel frame was constructed for each gate with wooden slats attached to the frame via stainless steel self-tapping screws, providing a much stronger structure.

One problem was identified during the construction of the new gates – the potential for rainwater to gather in a groove at the base of the frame. Static water left here would have no means of escape other than evaporation. Where this water came into contact with the wooden slats, it would eventually lead to rotting of the bottom of the slats.

To overcome this, the estate had the ingenious idea of creating a bevelled edge using a waterproof epoxy putty between the base and the frame behind it. Water would be diverted onto the ground instead of pooling at the bottom of the frame.

Sylmasta AB Original Epoxy Putty was chosen for the application because of its waterproof qualities and two-hour work time, enabling the putty to be shaped and formed without the threat of premature curing.

AB Original was mixed by hand. The putty was pushed onto the frame, easily adhering to the steel before being moulded into the required bevel. The bottom of each slat had been similarly bevelled, leaving a 5mm gap separating the wood and the putty.

Once set, AB Original provided an ultra-smooth run off. Rainwater would now drip down this run off, through the gap between putty and slats and onto the driveway below.

The steel frame, wooden slats and epoxy putty were then coated in a protective paint. The paint was a beige colour, disguising the steel frame and the epoxy putty to make the entire structure appear uniformly made of wood.

Since being installed, the new gates have proven to be far more robust against the extreme Scottish weather. The application constituted a fine piece of engineering involving some out-of-the-box thinking which should last a very long time.