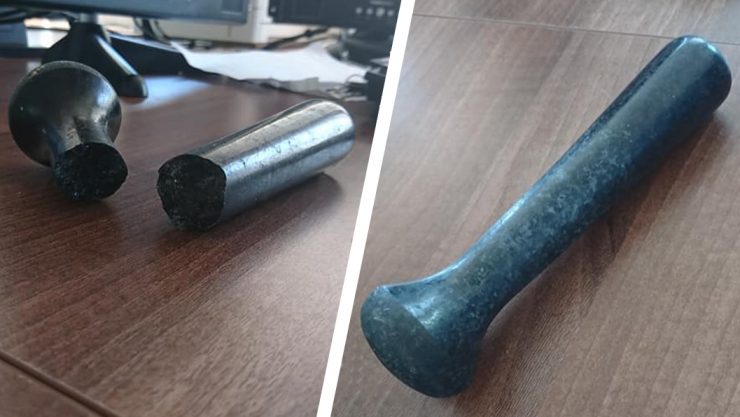 A high-strength, permanent repair using Rapid 5 Minute Epoxy Adhesive to a granite pestle cracked into two parts saves its owner from the grind of having to find a new mortar and pestle set for their kitchen.

Sylmasta Rapid 5 Minute Epoxy Adhesive
Epoxy adhesive with a 5 minute work time for high-strength bonding between all materials, including granite

The mortar and pestle set was made of granite. The pestle had been cracked in two parts when it was dropped onto a granite kitchen worktop, leaving a break close to the base of the tool.

As the owner was rather fond of the pestle, they wanted to repair it rather than buy a replacement. To do so, they needed to find an adhesive capable of permanently bonding the two parts together and withstanding the rigour the tool went through when grinding ingredients.

With traditional superglue ruled out as not being strong enough, they instead turned to epoxy adhesives. Sometimes known as structural or engineering adhesives, epoxies are used when high-performance, super-strength and powerful bonds are required.

Sylmasta Rapid 5 Minute Epoxy Adhesive was chosen due to its fast cure time and versatility in working effectively on a multitude of materials, including granite. Rapid 5 Minute comes with the two components that make up an epoxy adhesive – resin and hardener – kept separate.

Both parts were extruded onto a piece of cardboard and then mixed together with a spatula for around 30 seconds. Once an even mix had been achieved, the spatula was used to apply a layer of adhesive where the break was on the top part of the pestle.

The bottom section of the pestle meanwhile had been placed on a piece of rubber for support and to keep it upright. The top part was pushed firmly against the bottom section as soon as the adhesive had been applied. Excess epoxy squeezed out from between the joint was wiped away with a tissue.

Rapid 5 Minute sets in around 3 to 5 minutes at room temperature. The top of the pestle was pressed against the bottom for this period of time, after which the owner was able to stop holding it in place as bonding had begun to take effect.

The pestle was left undisturbed for a further 30 minutes, allowing the epoxy adhesive to reach maximum properties. A full cure was achieved within 24 hours, after which the pestle could be used again in the kitchen.