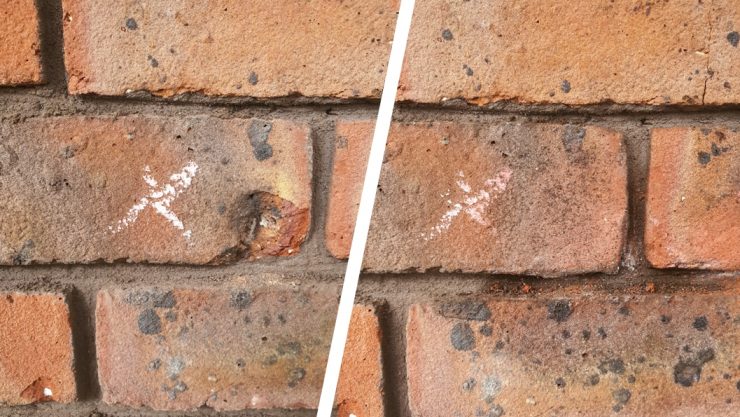 When lime blow left numerous bricks at a housing estate in the south of England with cracks, holes and missing chunks, a building company in the UK hit upon the idea of using epoxy putty as a brick repair and restoration material.

Lime blow occurs when clay bricks contain small amounts of lime. When the bricks are fired, this lime is converted to calcium oxide, also known as quicklime or burnt lime.

When calcium oxide mixes with water, it begins to slake in a highly vigorous process. Bricks which contain quicklime are therefore at risk or suffering from an eruption at their face when they become wet, causing chunks of brick to break away.

In a country like the United Kingdom where it rains a lot, lime blow is a frequent occurrence. Fortunately, it does not impact on the structural integrity of the brick. Some people even like the weathered, old fashioned look of bricks which have exploded.

The effect of lime blow however was not appreciated when the problem began happening frequently on a fairly new housing estate in the south of England. A building company were asked to find a cost effective and straightforward method of brick restoration, involving filling in the damaged areas.

After consulting Sylmasta, it was decided to use an epoxy putty. Magic Sculp Sculpting Putty was used for a trial repair, after which the company approved Sylmasta AB Original Epoxy Putty for all future brick restoration applications.

The putty was mixed by hand and then pushed into the holes and cracks in the brick face, filling in areas of damage. To ensure that the putty seamlessly matched the colour of the brick rather than the standard off-white it cured to, the putty was wetted once it had been applied to the wall and whilst still soft.

Dust was then taken from the brick undergoing repair and pushed into the putty, creating a material the exact same colour as the brick being repaired. To give the putty an identical texture to the existing brickwork, it was then spittled with a wire brush.

AB Original has a work time of two hours, after which it cures to form a solid material. So effective was the application that it is virtually impossible to tell where the area is on each brick that has undergone repair.

Using epoxy putty for brick repair is a practice that is growing in popularity across numerous sectors involved in construction. As well as builders and specialist brick restorers, Sylmasta also supply epoxy putty to facilities management companies, cable installers, DIY enthusiasts, gardeners and many more.

Any tradesperson or individual who may be required to fix a damaged brick – be it through lime blow, accidental damage or having to drill into brickwork – can easily fix holes, cracks and missing pieces using Sylmasta AB.