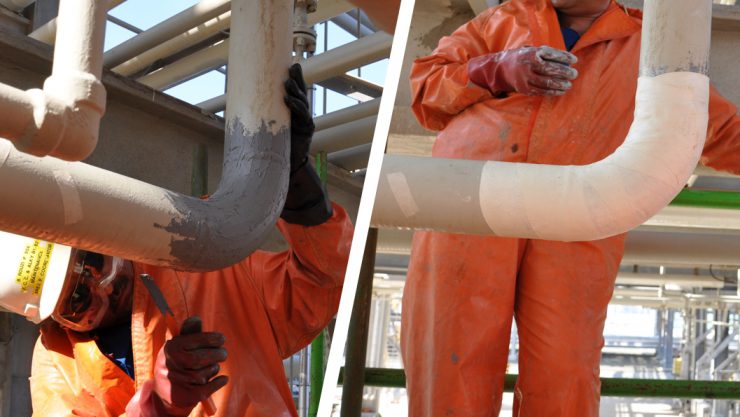 A pipe elbow on a 100mm sulphuric acid line operating under 22 bar pressure which had degraded from 22mm thickness to just 1mm undergoes urgent repair and reinforcement in Saudi Arabia.

The petrochemical refinery produces over 140 million barrels of petroleum products and 5 million tons of petrochemical products every year, including naphtha, kerosene, gasoline, diesel and fuel oil.

During a routine inspection, a 100mm sulphuric acid line operating under 22 bar pressure was found to have degraded to only 1mm thickness from 22mm on an elbow joint. This required urgent attention before the line failed.

The scale of production at the site meant that the petrochemical company were keen not to have to shut down the line to replace the weakened section, as this would severely impacted on output.

They therefore needed a flexible method of reinforcement for making an effective repair to the elbow on the sulphuric acid line which, for example, a pipe repair clamp would not have been capable of.

The petrochemical refinery consulted an engineering company with whom Sylmasta work with in the region, and they decided to apply Industrial Metal Epoxy Paste to the elbow to rebuild and strengthen it.

Industrial Metal is reinforced with corrosion-resistant metal platelets which provide excellent protection against corrosion and chemical attack, creating a tough outer shell around pipes and structures.

The epoxy paste was spread over the area requiring reinforcement using a putty knife. The 60 minute work time allowed for a large quantity of paste to be mixed and applied without the threat of premature curing, an especially important consideration given the hot climate.

If the remaining 1mm degraded further and the original line was breached, its contents would now be contained by a casing with high chemical and corrosion resistance surrounding the elbow provided by the cured Industrial Metal.

To further reinforce the elbow, SylWrap HD Pipe Repair Bandage was applied over the Industrial Metal. SylWrap HD is a composite repair wrap with a water activated resin which sets rock hard in 30 minutes.

It provided an impact resistant layer of protection over the elbow, increasing the hoop strength of the line until such time as a replacement could be conveniently carried out.

Whilst the reinforcement took place, the pressure was reduced to 8 bar with only a minor amount of disruption to operations at the site. 24 hours after the repair had been completed, the line was restored to its normal 22 bar pressure..

The petrochemical refinery were delighted with the ease and speed of repair made possible by Sylmasta. Regular inspections of the line showed that there had been little to no decrease in the strength of the repair over two years later.