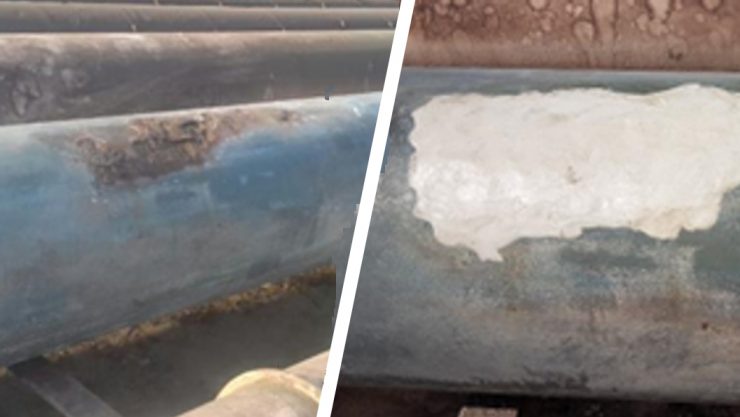 An industrial site in Saudi Arabia use two stages of the Sylmasta Pipe Refurbishment System to reinforce a 2 metre long section of heavily corroded steel pipe before the line was breached and required a complex leak repair.

The steel pipe was suffering from a 600mm patch of very heavy corrosion to its external surface. It was only a matter of time until the pipe was breached, at which point the site would have been forced to shut off the line whilst either the leak was sealed or a new section was installed.

To avoid this, it was decided to rebuild and strengthen the line before corrosion could eat all the way through the metalwork. The first stage of repair involved rebuilding the area weakened by corrosion, bringing it back up to full specification.

Because the corrosion was impacting only a relatively small area of pipe, it was decided to use Sylmasta AB Original Epoxy Putty to fill in the damage and restore the integrity of the line. Had the damage been on a much larger scale, an epoxy paste like Industrial Metal would have been applied using a hand tool.

Sylmasta AB is a super strength putty filled with ceramic to make it harder wearing. A two hour work time means it is more suitable for warmer climates like Saudi Arabia, where the cure is often accelerated by the natural temperature.

AB Original offers excellent protection against corrosion and chemical attack. In chemically aggressive environments, it can be used as a sacrificial layer to protect pipes and metalwork.

The two parts of the putty were mixed by hand in equal measures. It was then pushed down onto the pipe, where it cured to strengthen the heavily corroded areas by increasing the thickness of the pipe back towards its original specification.

Once the putty had cured, SylWrap CR Corrosion Protection Wrap was applied over the top to further protect the repair. SylWrap CR is a black-coloured composite repair bandage incorporated with highly effective corrosion inhibitors.

It has been specially formulated to protect pipes, metalwork and other structures in harsh and aggressive environments against corrosion. SylWrap CR was activated with water and then wrapped and smoothed along a 2 metre section of the pipeline.

Within minutes, it began to cure rock hard. Once set, SylWrap CR formed an impact resistant shell around the pipe to further strengthen it from future attack and remove the prospect of a breach in the line.

Completing the repair from the first kneading of Sylmasta AB to the finished application of SylWrap CR took half a day. The line remained in operation throughout, meaning there was no disruption to the site and the reinforcement cost a fraction of a future leak repair or replacement of an entire section of the line.

The site were therefore very pleased that they opted for strengthening the steel pipe before their corrosion problem could develop into a much bigger issue.