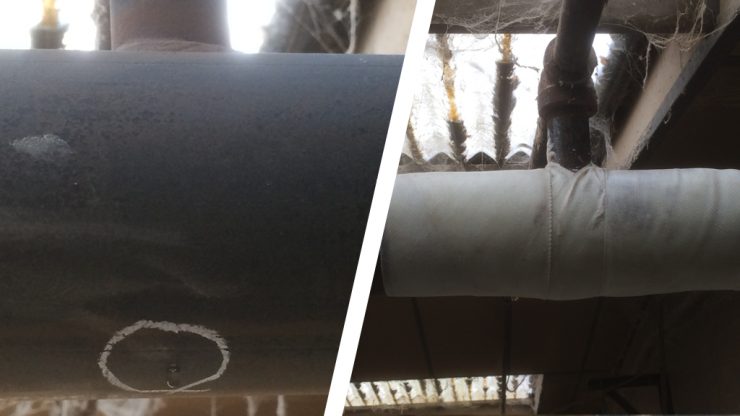 After a sprinkler maintenance company informed a furniture company that the only solution to a pinhole leak on a tee in their factory’s sprinkler system was to replace a damaged section of steel pipe, the furniture company instead sought out Sylmasta to provide a cost-effective and convenient repair.

The furniture company needed a quick repair for a number of reasons. There were two safety elements to consider; the first being the very obvious dangers that come with a faulty sprinkler system and the second that the leaking pipe was located high up in the roof of the warehouse, next to the incoming electricity supply.

Any water which passed through the leaking section was therefore in danger of coming into contact with the electrics. There was also the danger that water escaping from the pinhole would cause damage to the furniture being stored and manufactured below.

Initially, the furniture company contacted their sprinkler maintenance company. After inspecting the problem, the maintenance company decided to try and repair the leak with a pipe repair clamp. This proved impossible however due to the pinhole being directly below a tee junction in the steel pipe.

After this failed attempt, the sprinkler maintenance company advised that the only solution would be to replace the leaking section of steel pipe, at great cost to the furniture company and forcing the closure of the factory whilst the work was undertaken.

Understandably, this was a road that the furniture company did not wish to go down, and so they decided to seek out alternative repair methods, leading them to Sylmasta. Because the pressure was turned off in the damaged section of the sprinkler system, Sylmasta were able to recommend a SylWrap Standard Pipe Repair Kit for the repair.

The furniture factory reached the damaged section of pipework using a tower. Once up in the rafters, a Superfast Steel Epoxy Putty Stick was mixed by hand and used to plug the pinhole leak. The Putty hardened within 5-10 minutes, after which it was overwrapped with a SylWrap HD Pipe Repair Bandage.

The bandage was applied over the pinhole leak and around both sections of the tee junction to provide maximum coverage and pressure resistance. One of the furniture factory’s concerns was that the pressure in the sprinkler system can be as high as 8 bar and they needed a repair method that could withstand such levels.

This was no problem for the Standard Pipe Repair Kit. The cured Superfast Steel and SylWrap Bandage are suitable for repairs up to 30 bar. Within an hour of the repair being completed, the system was put back into use at a fraction of the cost of the section replacement recommended by the sprinkler maintenance company.

Following the repair, the furniture company’s maintenance manager got in touch to say: “I found the repair putty and the bandage very easy to use and will no doubt be using Sylmasta products again.”