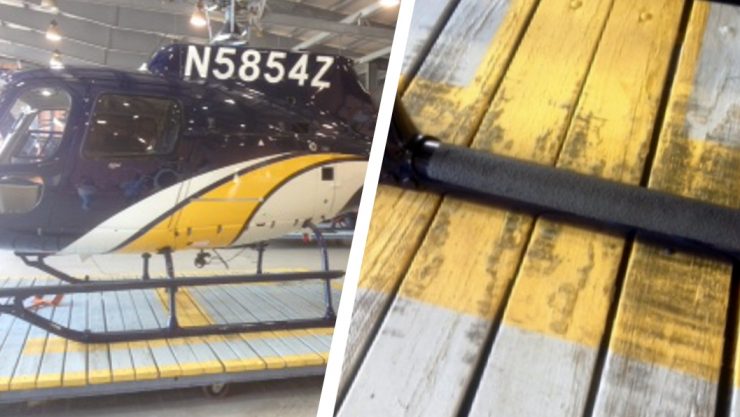 With workers regularly carrying out jobs whilst standing on the legs of helicopters belonging to the Puerto Rico Power Authority, the company decided to seek a permanent solution for creating an anti slip surface for helicopter skids to prevent accidents happening.

The Puerto Rico Power Authority operates a fleet of helicopters. The helicopters help workers reach remote areas of Puerto Rico which are difficult to access by road and smaller islands off the mainland.

They are also used to help repair and maintain equipment operated by the company. Some of these jobs required workers to stand on the metal legs of the helicopter. To protect their workers from the very real risk of slipping from the helicopter legs and having a serious accident, the Power Authority applied anti slip tape to the skids.

With their helicopters often operating in harsh environments and the anti slip tape not being the most robust of materials, in some instances the Power Authority were having to spend time and money on re-taping skids once a month.

They also had concerns about the safety of the tape. The frequency with which it became worn, damaged and lost adhesion therefore left the Power Authority seeking a long term, trustworthy alternative.

Sylmasta suggested coating each of the helicopter skids with Liquid Metal Epoxy Coating and then applying silicon carbide grit to the wet surface, creating a permanent anti slip surface to better protect workers.

Liquid Metal is a metal-filled, brushable epoxy which is painted onto surfaces to create a new layer. Whilst sticky, it offers high strength adhesion to all materials. Its 90 minute gel time allows careful application without the threat of premature curing.

The epoxy was mixed and then applied via brush across the top of each helicopter skid. Silicon carbide grit was then deposited over the coating of Liquid Metal, completely covering the skid. Once cured, the grit was permanently bonded.

Within three days, the Power Authority had successfully carried out the procedure to every helicopter in their fleet. Since the application was first carried out 15 years ago, the skids have been re-coated with Liquid Metal and silicone carbide grit once every five years.

A repair every half a decade is a far cry from the laborious task of regularly applying anti skid tape. Workers standing on helicopter legs to keep the power running in Puerto Rico are now much better protected thanks to Liquid Metal.