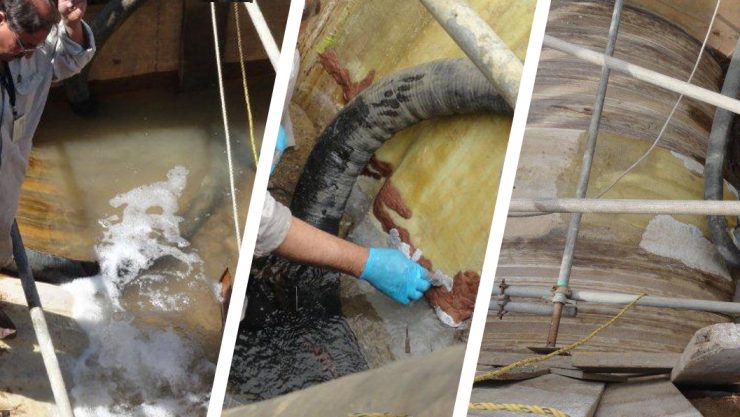 A rapid epoxy putty repair made to an underground 3000mm FRP return pipe in a seawater cooling system cut downtime at an oil refinery to just two days of reduced production, compared to several weeks for a replacement section to be fitted.

Sylmasta AB Original Epoxy Putty
Epoxy putty with a longer work time, allowing more to be mixed and applied to larger cracks without the threat of premature curing

The oil refinery was one of the biggest in the Middle East, processing approximately 400,000 barrels per day. Various processes at the site relied upon the seawater cooling system, which extracted water from the Red Sea and transported to and from the refinery.

This was done via a network of underground 3000mm GRP (glass reinforced plastic) lines. Whilst such large pipes enabled vast quantities of seawater to be moved around, any failure would have a hugely detrimental impact on the efficiency of the system and cause massive water loss unless attended to as a matter of urgency.

A potential problem with the return line was first flagged when the ground above a section of buried pipe was noticed to be wet. The line was taken out of service and excavation organised, leading to a hole being dug to access the top 50 percent of the vast pipe.

The earth surrounding the pipe was thoroughly saturated, indicating a significant leak. When pressure was then turned back on, so much water escaped from several areas that the hole was instantly flooded. This water had to be pumped out to regain access to the line.

Clearly, the pipe could not go back into service leaking so much water until it had been sealed. This was problematic for the refinery, who needed the line in operation for oil to be produced at full capacity. For this reason, replacement of the damaged section was not considered an option as it would have left the line out of action for up to three weeks.

With a rapid repair required, it was decided to use two epoxy putties to seal the seawater cooling system return pipe. For the smaller cracks on the line, Superfast Copper Epoxy Putty Stick was chosen. Although designed for copper pipe repair, it adheres to all materials and comes with a fast work time.

Superfast Copper is supplied in a 114g stick containing pre-measured resin and hardener. The required amount of putty was cut from the stick, kneaded by hand, and then pushed into the cracks on the GRP line whilst soft.

The heat of Saudi Arabia accelerated the five minute cure time of Superfast Copper so that within a couple of minutes, the putty began to set to a material as hard as steel, permanently fillin the cracks and starting to seal the line.

For the bigger cracks, a putty with a longer work time was needed so that greater quantities could be mixed and then applied over larger areas without the threat of premature curing. Sylmasta AB Original Epoxy Putty was used for both its two-hour cure and its availability in bulk sizes far beyond the 114g per stick offered by Superfast Copper.

Both Sylmasta AB and Superfast Copper achieved maximum properties after 24 hours. Applying the epoxy putties to all leak areas took less than four hours. A day later and the system was turned back on.

Once it had been established that no water was now leaking from the pipe, the line was reburied. Whilst the repair was carried out, the refinery had to operate below full capacity for only two days with all the required materials costing under £100 – a far cry from the disruption and expense which would have come with replacing the damaged pipe.