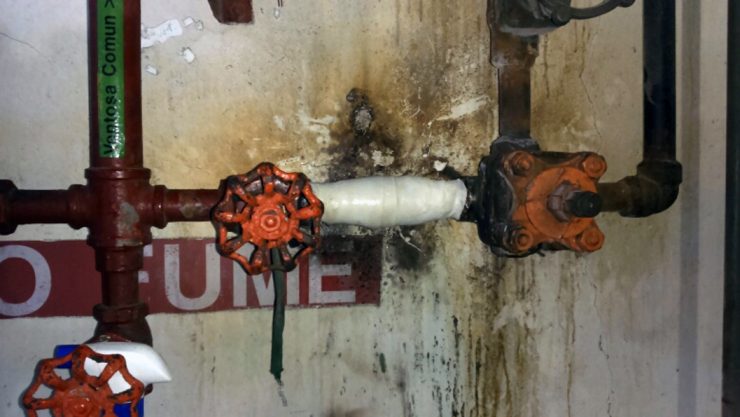 When a hydrogen line newly installed as part of upgrades to a power station cooling system in Puerto Rico was discovered to be leaking from two joints, repair and reinforcement was needed before the pipe went into full service.

The power plant had previously stored hydrogen used for cooling in an off-site tank. Procuring hydrogen, refilling the tank and then keeping vast amounts of gas was an expensive process.

It was also inefficient. It could take up to four days to deliver refills to the tank, sometimes causing interruptions to power output as turbines at the plant had to be shut down when hydrogen supply ran out.

To overcome this, the plant took the decision to install a new cooling system, including an on-site hydrogen generator capable of supplying gas as and when it was needed.

Pipes would carry hydrogen from the generator to the areas of the plant it was required for cooling purposes, eliminating the need for the plant to buy and then store gas away from the site.

Because gaseous hydrogen consists of such a small molecule, very small leaks are common. These tend not to be dangerous as the tiny amounts of hydrogen being released are not enough to cause a flammable mixture in the air. Problems arise only when the gas can accumulate in a confined area.

Human senses cannot detect small hydrogen leaks as the gas is colourless, odourless and tasteless. To ensure that the newly installed cooling system was in good working order before it was put into full service, the plant therefore used portable hydrogen detectors to analyse the pipes.

It was discovered that a section of the line was leaking, suspected to be from two joints between two valves around 600mm apart. Although the hydrogen leaks posed little threat, the plant decided to repair and reinforce the pipe for efficiency reasons as well as their own peace of mind.

The line was isolated and Superfast Steel Epoxy Putty Stick applied to the joints at either end of the pipe. The required amount of Superfast Steel was cut from the stick and kneaded by hand.

Whilst soft, it was pushed tightly onto the pipe around both joints. Within 10 minutes, the putty hardened to form a steel-like material to plug any gaps in the pipe through which hydrogen could be leaking.

The line was then further reinforced with a SylWrap HD Pipe Repair Bandage applied along the entire 600mm section. SylWrap HD is a composite repair wrap with a water-activated resin which sets in minutes, curing to form an impact resistant sleeve around pipes and structures.

Despite the pipe being positioned close to a wall, the maintenance team at the plant were able to wrap the pipe effectively with a 50 percent overlay.

The Bandage was smoothed with water as the application continued. Once set, it provided a rock-hard, chemically inert outer shell over the leaking joints strong enough to prevent further hydrogen molecules escaping.

24 hours after the repair and the hydrogen pipe was repressurised. With the hydrogen detector now finding no gas in the air, the application had been a success and the new cooling system could be put into full service.