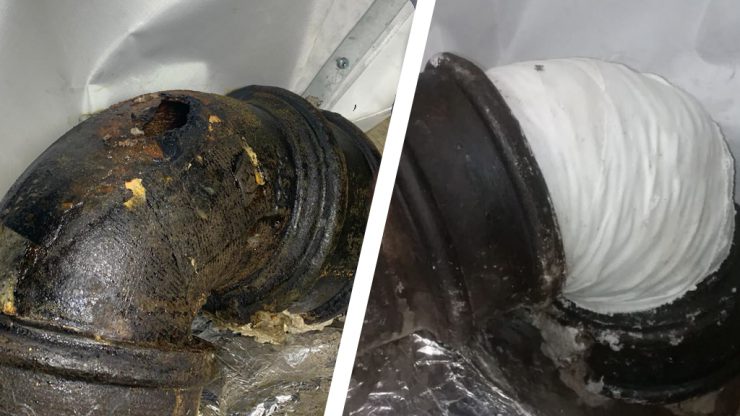 An iconic central London hotel faced having to shut one of its most prestigious rooms after a cast iron wastewater pipe located in the ceiling above developed a large circular crack which initially proved impossible to repair.

Several attempts had been made to repair the leaking cast iron wastewater pipe, but its location within the hotel made it particularly troublesome. The pipe was crammed into a gap between the floor of one level and the ceiling of another, leaving virtually no room to work.

The hotel’s initial repair attempt had seen them try and wrap the pipe with a repair bandage. Although the crack was successfully covered, it was not successfully sealed and so began leaking again once pressure was turned back on.

The 50 x 25mm hole therefore required an alternative repair method. To complicate the repair further, the crack in the cast iron wastewater pipe was on an elbow joint.

Sylmasta decided that the most effective pipe repair product to seal the hole would be Superfast Steel Epoxy Repair Stick. The size and the position of the crack still possessed some challenges, which were eventually overcome by some out-of-the-box thinking by the Sylmasta technicians.

The Superfast Steel Stick was hand kneaded as normal, but rather than being pushed immediately into the crack it was instead formed into a disc larger than the hole in order to completely cover it. This disc of epoxy putty was then attached to a strip of polythene sheeting.

The sheeting would support the epoxy putty whilst it was stretched over the crack in the pipe. Once in position, the edges of the disc were pushed tightly down onto the cast iron pipe to form a good seal with the surface of the pipe.

Once the epoxy putty was in place, the whole repair was overwrapped with a SylWrap HD Pipe Repair Bandage. SylWrap is water activated and sets rock-hard to provide an impact resistant layer over the initial repair. It does not need to be stretched for an effective application, meaning that it could easily be applied to the cast iron pipe despite the space constraints.

After the repair was completed, the hotel was able to reopen to the public the popular room which had been affected by the leaking wastewater pipe. The solution is permanent and was carried out at a fraction of the cost of hiring a plumber or replacing the damaged pipe.

It also saved time with the repair being effective in less than an hour. Sylmasta have since recommended that the hotel take stock of the SylWrap Pipe Repair Contractor Case, a kit which contains enough products to carry out up to six pipe repairs.

A Contractor Case can be easily stored on site, enabling an emergency pipe repair to be carried out as soon a pipe related problem arises for the hotel in the future. All the products included in the Contractor Case are WRAS approved, making them safe to use with drinking water.