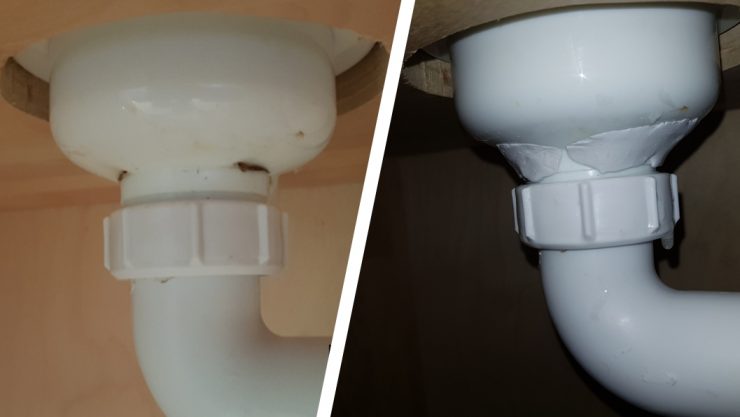 A homeowner used Superfast Plastic Epoxy Putty Stick to make a quick and easy DIY leak repair to cracks in a PVC plastic drain pipe located in a cupboard underneath their bathroom sink.

The homeowner was alerted to the problem when they noticed that the bathroom floor next to the cupboard below the sink was wet. After inspecting inside the cupboard, it was discovered that several small cracks had developed in the PVC plastic drain pipe at the point where it connected with the sink.

The homeowner did not want to go to the expense of hiring a plumber to fix what they considered a minor problem. They instead purchased a Superfast Plastic Epoxy Putty Stick from Sylmasta to carry out a DIY repair of their own.

Superfast Plastic is a semi-flexible epoxy repair putty in an easy-to-use 114g stick format. It sets white and has been specifically formulated for the repair and bonding of all major plastic types, including PVC.

Before the repair began, the pipe was dried and cleaned. The required amount of putty was cut from the stick and kneaded by hand. Superfast Plastic starts out blue before the dye within the putty turns white to indicate successful mixing, after which it can be applied.

Superfast Plastic achieves full properties in two hours, at which point the homeowner ran the tap on their sink. With no water escaping from the pipe into the bathroom cupboard as the sink drained, the leak repair had been a success.

Carrying out a DIY PVC pipe repair using Superfast Plastic cost less than £20, including shipping. The repair was permanent and the putty blended in unnoticed with the PVC plastic – just in case a future homeowner was a perfectionist and wanted a pipe in a darkened cupboard under the bathroom sink to look aesthetically pleasing.