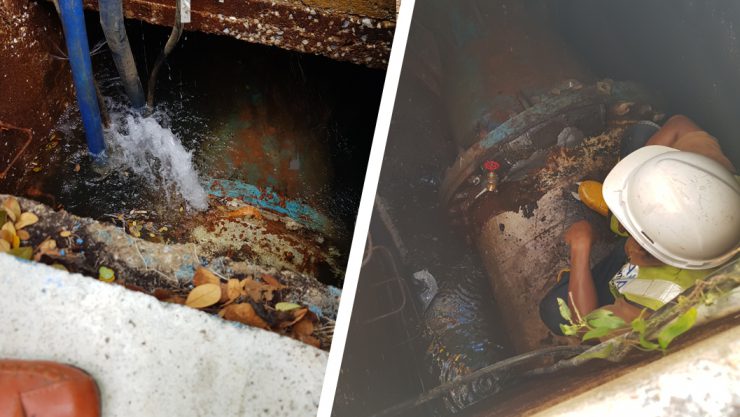 Water escaping from cracks caused by corrosion around a flange on a 900mm steel water main had flooded an underground chamber, leaving a pipe repair to be considered impossible until a determined Malaysia engineering team spent two days on the scene.

Heavy corrosion had caused numerous cracks to appear on the 900mm steel pipe around a stub flange. The leak point was located in an underground chamber, which had subsequently filled with water escaping the pipe at high pressure.

Accessing the pipe was difficult even before the flooding of the chamber. A repair clamp could not be fitted because of the flange, and the main was so close to the ground that there was insufficient room for pipe repair tapes or bandages to be wrapped around the pipe.

There was no visible means of isolating the main either, meaning that pressure could not be turned off or reduced. Replacing the damaged section would have involved excavating the chamber and shutting down the main for a prolonged period, something not considered an option by the water company operating the system.

As a result, repairing the main had been considered impossible. It had been allowed to leak unabated since the problem was discovered, save for a few cursory checks and the pumping out of water when flood levels became dangerously high.

That was until an engineering team arrived on site, accompanied by a technician from Sylmasta, who were determined to formulate either a method for repairing the main or a means of substantially reducing the amount of water being lost.

Before any repair could be attempted, water had to be pumped out of the chamber. Once this had been done, an engineer accessed the pipe and hammered a series of plastic plugs into the larger cracks along the flange.

The plugs reduced the amount of water escaping from the pipe enough for a proper inspection to take place. The engineer in the chamber then spotted a stopcock a little further along the pipe.

They were able to reach the stopcock, preventing flow into the leak area. With pressure now turned off, it meant that Superfast Steel Epoxy Putty could be used to attempt to permanently seal the cracks in the main.

Superfast Steel has a fast, 10 minute work time and comes in an easy-to-use 114g stick format. A large number of sticks had to be used in the application because of the size of the repair.

Each stick was kneaded by hand. Whilst soft, the putty was pushed into visible holes in the pipe where it hardened, filling the crack. Superfast Steel was also used to seal the flange and as a means of permanently fixing the rubber plugs in place.

Because of the diameter of the pipe and the size of the damage area, it took over an hour to apply the necessary Superfast Steel. With flow isolated, it was difficult to tell whether all the leaks in the pipe had been found and sealed.

Even after pressure was restored, it was still hard to identify remaining problem areas. As a result, the maintenance team decided to return 24 hours later to check the effectiveness of the repair.

Unfortunately, this inspection revealed that the main was again leaking, although nowhere near as seriously as before. There were several small leak areas which had not been suitably arrested the previous day, alongside a larger jet of water escaping from a gap between the flange and the pipe.

Further Superfast Steel was used to seal the smaller leak areas. The epoxy putty was worked into a sausage shape and pushed into the remaining cracks in the pipe.

For the larger leak, the engineering team manager hit upon the idea of fixing a valve in place using more Superfast Steel. The water trying to escape the main would be channelled towards this valve. A tap would be fitted and closed, sealing the pipe shut.

Tapping off the main ended up being a success, much to the delight of the water company and the engineering team. Normally, Sylmasta would recommended reinforcing the epoxy putty with SylWrap HD Pipe Repair Bandage, but that was just not possible in this application.

It may have taken two days, but the ‘impossible’ water main repair had been completed, reducing the levels of water being lost and preventing any further flooding of the chamber.