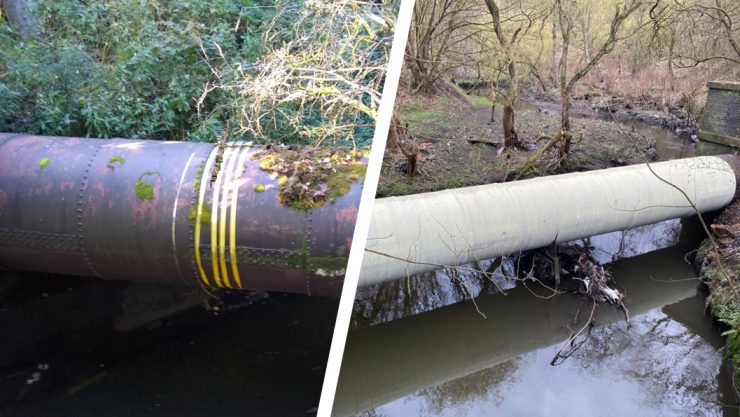 SylWrap HD Pipe Repair Bandage
Four-layer application over the entire length of the bridges for protection, strengthening and life-extension.

The two gravity-fed pipe bridges in Lancashire which were constructed of steel riveted plates had become corroded over time. They were now leaking in several places, allowing foul wastewater to fall into a stream below.

Although it was planned to replace these pipe bridges at some point in the future, an immediate solution was required to stop the leaks. At the same time, the lifespan of the bridges also needed extending so that maximum benefit could be gained from the investment required for such a complex repair.

These complexities included building scaffolding on the riverbed and sourcing materials for the repair and reinforcement of such substantial pipe bridges: one being 1.5m x 20m and the other 1.8m x 20m.

A previous attempt had been made to seal some of the leaking joints using ratchet straps with a rubber pad. These however had proven unsuccessful and further leaks had appeared since.

Sylmasta were consulted on the repair, and it was decided that Wrap & Seal Pipe Burst Tape would be used over the leak areas. Wrap & Seal is a heavy duty repair tape made from self-amalgamating silicone which, when stretched by 300 percent across a leak, forms a tight rubber seal. Multiple layers increase the pressure applied until the leak stops.

Once all leaks had been addressed, the entire structure was wrapped with SylWrap HD Pipe Repair Bandage. SylWrap HD is a composite repair wrap with a water-activated resin which sets rock hard in minutes, providing protection and reinforcement to pipework.

Four layers of SYL1266HD (300mm x 20m) were applied to each of the pipe bridges along their 20m length, providing a substantial protective sleeve, completing the repair and guarding against future leakage and corrosion.

Although the utilities company responsible for the pipe bridges were only seeking a temporary solution, using SylWrap HD in the repair provided reinforcement and additional strength which will last for 20 years.

Once the repair was completed, it was estimated that a saving of approximately £250,000 had been made compared to the cost of replacing both pipe bridges, so Sylmasta’s solution was very much welcomed by all involved.