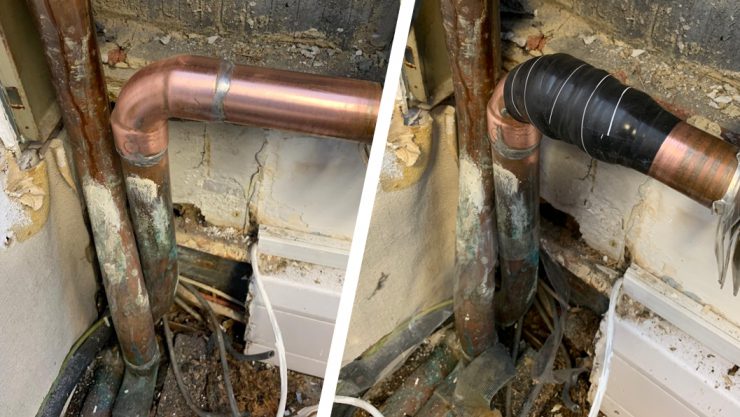 After ignoring a leaking joint on a badly soldered copper pipe for a prolonged period of time, a property owner was spurred into carrying out a repair once it became known that escaping water had begun rotting wooden floorboards and a joist underneath the leak area.

The problem pipe was a 22mm copper perimeter heating pipe which had been boxed in behind a grill. Poor soldering had caused it to leak, but the property owner deemed the water escaping to be so minimal that they did not feel it worth either attempting a repair themselves or going to the trouble and expense of hiring a plumber.

After a significant period of time, the joint in question had leaked enough to rot away woodwork both underneath and around the pipe. Wooden flooring below had been badly impacted, with the leak starting to cause damage to the joists further down.

To prevent the leak causing further deterioration to nearby wood, the property owner now needed to carry out a leak repair to the pipe. They were still keen to minimise cost and so came to Sylmasta, who recommended Wrap & Seal Pipe Burst Tape for the application.

Wrap & Seal is made from self-fusing silicone and stretches by 300 percent. When wrapped around a pipe, it forms a solid rubber band over holes, cracks, and leaking joints.

Having cleaned the pipe completely, the property owner applied Wrap & Seal around the badly soldered joint, ensuring a tight seal to permanently repair the leak.

The repair was completed in under 30 minutes. The property owner said afterwards had they known that fixing a leaking joint could be so straightforward, they would never have ignored the leak and left the problem unrepaired for so long.