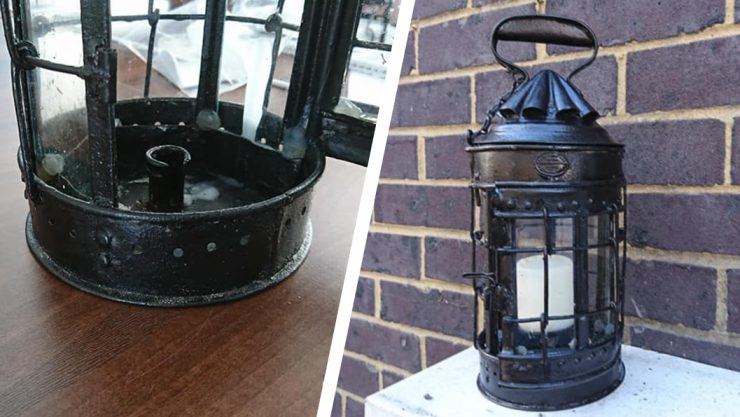 Superfast Steel Epoxy Putty is used in the restoration of a lantern made by famous Birmingham lamp maker Arthur J. Poole and dated to the 1870s or 1880s, returning it to working order so that it could light up spaces as it did in its Victorian heyday.

Arthur J. Poole manufactured a huge range of candle-lit lanterns, lanterns for police offices, lamps for use on the railways, maritime signal lamps capable of transmitting Morse code, and copper coal buckets from his factory in the heart of Birmingham during the 19th century.

The lantern in question was candle powered, dating it to the 1870s or 1880s before paraffin became more widely used. For an item the best part of 120 years old and which had clearly spent most of its life as a working lantern, it was in remarkably good condition.

There were two areas which needed attention before it could be used once again. The lantern no longer had a latch to close the door in place. Whenever there was a breeze or the device was being transported by its handle, the door would therefore swing open and the candle inside would be extinguished.

The other problem was that the original candleholder was very small, and not suited to most modern day candles. To overcome this, it was decided to make a round platform that could take tea lights or other larger candles and fix a spike on the bottom that could slot into the existing candleholder.

This was done using Superfast Steel Epoxy Putty. Superfast Steel comes in a pre-formatted 114g stick. The user cuts off the amount of putty required and then mixes it by hand, instigating a chemical reaction between the resin and hardener.

Superfast Steel has a work time of between 5-10 minutes. Whilst soft, it can be shaped and formed as desired. Once cured, it offers super-strength adhesion between different materials and forms a material as hard as steel.

The spike easily bonded to the platform, creating a new holder capable of supporting a modern candle inside the lantern and completing part one of the restoration.

To create a new handle for the door, a metal wire was bent into a T-shape by folding a strip in half, then bending the two ends at right angles. It was attached to the door via two plastic tubes which were bonded to the lantern using further Superfast Steel.

When the door was closed, this metal wire could now drop into an existing latch attached to the opposite side of the lantern, locking it in place and preventing the candle from blowing out.

A coating of black paint was added to the wire, the plastic tubing and the Superfast Steel to complete the restoration at a cost of under £15.

The lantern is now lighting up a garden in East Sussex and ready for another 120 years of service. Arthur J. Poole himself would have been impressed.