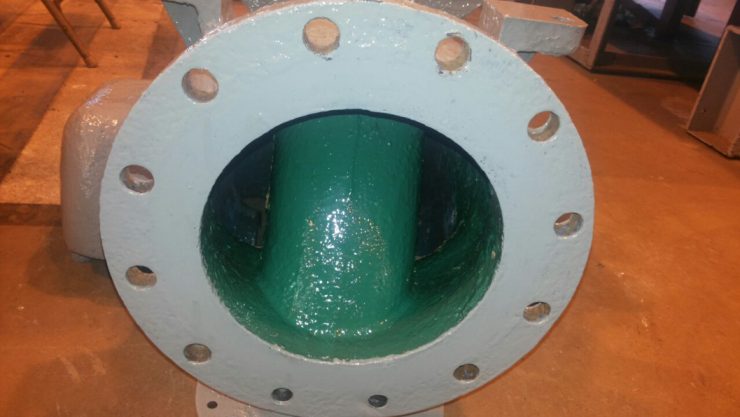 Sylmasta provide a long-term repair solution for a water treatment plant in Puerto Rico, whose pump extracting from a below ground well had become heavily worn due to minerals and sediment in the water.

The large water pump was used by the water treatment plant to extract water from a well. The water was then distributed around the entire site for various purposes, making the pump central to operations.

This natural groundwater contained minerals, sediments and impurities which caused deterioration to the pump. Over time, the pump became so worn and degraded that there was a substantial risk of bursting.

A burst would have been a disaster for the plant. Operations would have needed to be shut down and a replacement pump fitted. This would have been a costly and time-consuming exercise, potentially involving the fabrication of a new pump and its shipping to Puerto Rico.

Before the water well pump reached the stage whereby it needed to be replaced, the treatment plant decided to repair and reinforce the system using a hard-wearing, abrasion resistant coating.

It is painted onto surfaces which have suffered heavy damage or been weakened by corrosion and abrasion, restoring their strength and protecting the original part from further damage.

The two parts of the epoxy coating were mixed in the prescribed ratios and then brushed onto the pump. The 90 minute gel time of Ceramic Brushable enabled more epoxy to be mixed and applied without the threat of premature curing.

Four coatings were used, each between 1mm and 2mm thick. This built up a substantial, reinforced shell around the worn pump to restore the weakened metalwork to its original thickness.

With a recoat time of around four hours, it took two days to complete the repair. The application took place over night whilst the site was shut down to limit disruption and the cost was insignificant compared to fitting a new pump.

The treatment plant now monitor the pump on a regular basis for future wear caused by corrosion and erosion. When there are concerns that it is becoming too weak, further coatings of Ceramic Brushable are added to restore integrity.

Speaking about the process, the maintenance manager at the plant said: “The pump deteriorates very soon but coating it in Ceramic Brushable helps a lot.” In this way, Sylmasta have provided a cost-effective and long-term solution.