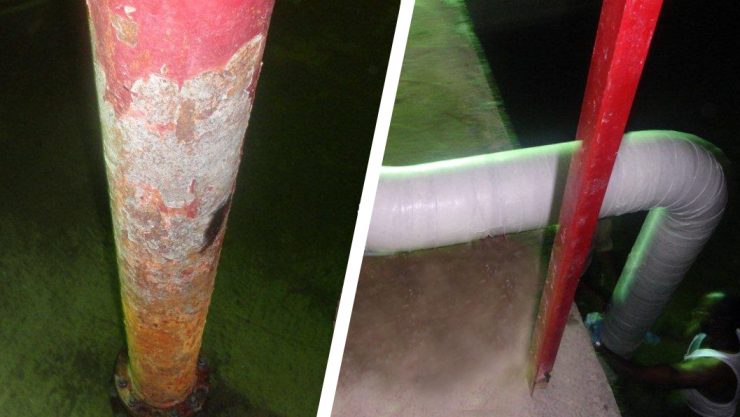 A six metre long section of steel pipe – which included two 90 degree elbow bends – operating in a water pumping house at a fire station in Saudi Arabia required urgent repair and reinforcement before the heavy corrosion the pipe was suffering from breached the line.

The 150mm steel pipe brought water from a reservoir on the lower levels of the pumping house up to the top levels, where it was required for different operations at the fire station.

After many years of service, the pipe was suffering from heavy corrosion. The damage was particularly bad on the section of pipe beneath the surface of the reservoir, where it was exposed to constant contact with water.

Although the pipe had not yet been breached, the metalwork had been weakened to the point where it was only a matter of time before corrosion caused cracks and holes to appear. Replacing the six metre section after this happened would have been difficult because of the shape of the pipe.

There were two 90 degree elbow bends in the pipe. The first changed the pipe direction from running vertically up and out of the reservoir to horizontally at the point where the line reached the upper levels of the building. The second was some 50cm further along, taking the pipe off to the right to connect with valves and equipment.

The complex shape meant that replacing the line would require specially fabricated parts at considerable expense. Not only was the cost prohibitive, but there was the possibility the station might be decomissioned in several years time.

With resources stretched, spending money on the expensive installation of a replacement pipe only for the pump house to be taken out of service within a decade would not have been a good use of funds.

The station therefore sought to carry out pipe reinforcement of the existing steel line instead, strengthening it and protecting it against further corrosion. This would extend the lifespan of the line until a decision was made about the future of the pump house and the station.

It was decided to wrap the entire six metre section in SylWrap HD Pipe Repair Bandage. SylWrap HD is a composite wrap with a water activated resin which sets in minutes to provide an impact resistant protective sleeve around pipes and structures.

Starting from the upper level of the pump house, SylWrap HD was applied to the pipe with a 50 percent overlay. More water was used to smooth the bandage as it was wrapped, moulding it tightly to the line and around both of the bends.

The repair continued in this manner as the line headed down to the lower levels of the pump house, including when the pipe went beneath the surface of the reservoir.

SylWrap can be applied and sets underwater, enabling every part of the pipe to be refurbished. Once fully cured, the bandage formed a rock hard shell encompassing the entire line and offering new strength to the pipe.

Within two hours, the fire station had completed the repair with the entire pipe successfully reinforced. The SylWrap sleeve surrounding the pipe prevented further external corrosion attacking the exterior and weakening the line, reducing the chances of future failure.